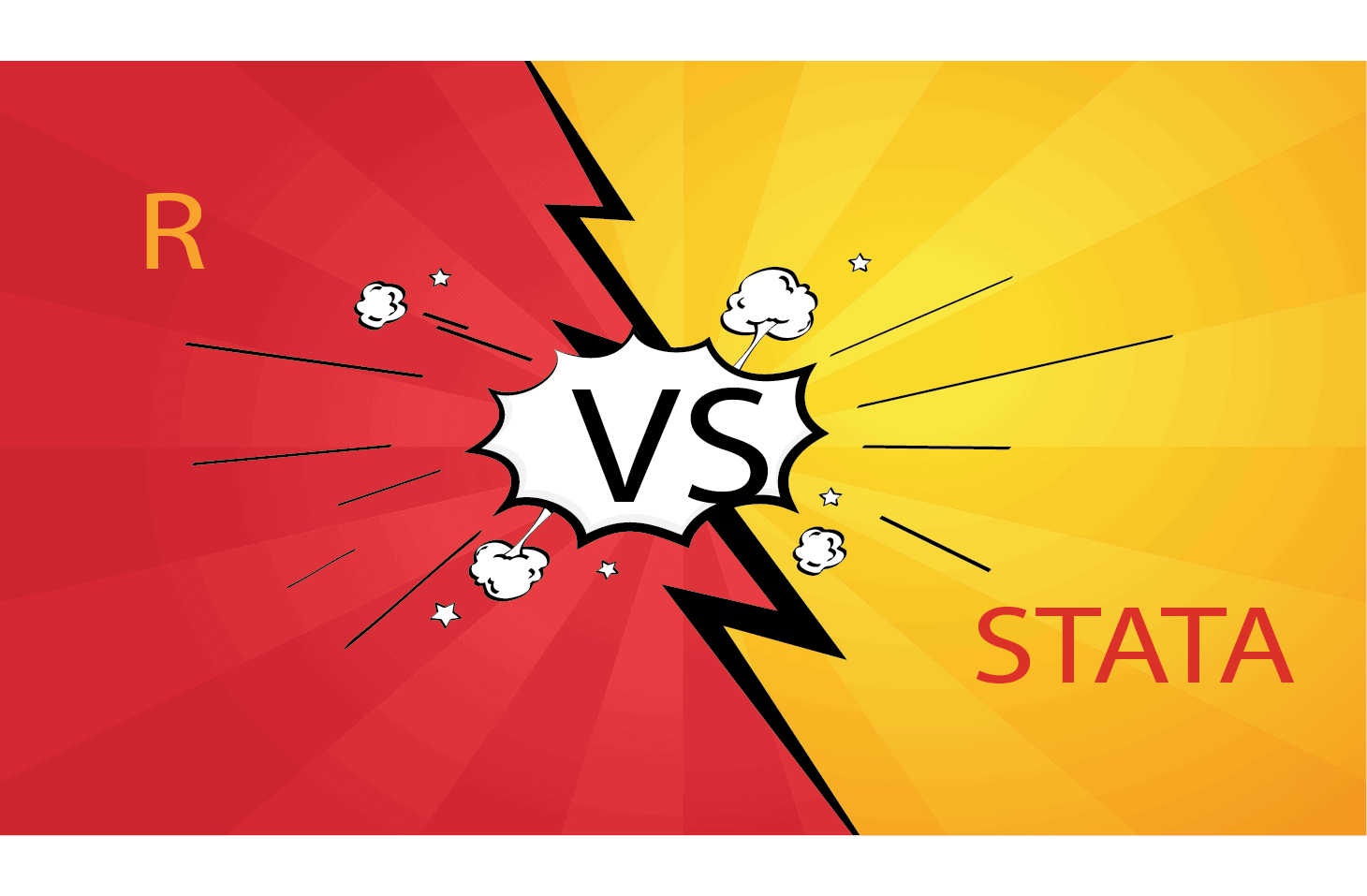 Today we are going to discuss the comparison between R vs Stata. It is always overwhelming for the students to compare them for data science. As a statistics students you should know which one is best for data science between R vs stata. Before we get into in depth comparison, we should have a look on the definition of both of these.

R programming is one of the most influential and most reliable statistics languages in the world. It is used for statistical computation and graphics. It is offering high-level graphics, interface to other languages, and debugging facilities. R is known as the predecessor of the S language.

It was designed in the year 1980s and has been used by the majority of statistical communities around the world. But the official release of R was in the year 1995. The primary motive behind the development of R was to allow the academics statisticians to perform complex data statistical analysis. R is derived from that initials of two developer’s name i.e., Ross Ihala and Robert Gentleman. Both of them were associated with the University of Auckland when they developed R.

Stata is one of the most popular and widely used statistical software in the world. It is used to analyze, manage, and produce a graphical visualization of data. The primary use of Stata is to analyze the data patterns. Researchers are using Stata in the field of economics, biomedicine, and political science.

Like only a few software, it offers you the command line as well as the graphical user interface that makes it more powerful. It was created in the year 1985 by StataCorp. Stata is the most compelling statistics software; that’s why it is used in more than 180 countries around the world. And thousands of professionals and researchers trust on this software.

On the other hand, learning of Stata is quite easy as compared with R. Because learning software is always easier than learning a programming language from scratch. Like R programming Stata also offer the community support to the users. In their community support, you can find other users who can help you while you face problems using Stata. Apart from that, some experts in their community can help you to learn Stata. Stata also offers extensive learning support to users in the form of blogs, tutorials, webinars, training, journal, etc.

As we have already discussed that R is an open-source programming language, it means that it is free to use for anyone. Therefore you may not find any official support for the R programming language. But you can find help with R using its documentation, community support, manuals, journals, etc.

R is free to use for everyone. You need to install it from the internet, and you can run it without paying a single penny to anyone.

On the other hand, Stata price starts at $179.00 per year per user. Stata offers different versions for students, education, government, and business. It also provides the new purchase, upgrade, and renew facility of the packages. The license is also divided into two categories i.e., single-user, multi-user, and site license.

R offers a variety of updates at regular intervals, and you can get the latest update of R on its official site. Apart from that, R also provides updates on its packages that allow you to stay updated with the data science environment.

Now we have seen the in-depth comparison between R and Stata. R is a programming language that allows you to do a lot more than you can do with the Stata. I would like you to recommend R for data science if you do have a basic knowledge of coding, or you are familiar with the coding environment.

On the other hand, if you have some coding knowledge or no coding knowledge, then you should choose Stata over R. Because it is quite easy to use and anyone can use it effectively. The beginners need only prior training to use it like a pro.

But if budget is a big issue for you, then you should choose R. you can get the excellent command over R with the help of a few month’s training. The training will cost you some money, but it will help you to use the free language for a lifetime. Now it’s over to you which one you prefer between R vs Stata.

Get the best help in R programming and statistics homework help from the experts at nominal charges. We are offering the great assignment help services to the students.

R is one of the most influential and most reliable statistics languages in the world. It is used for statistical computation and graphics. It is offering high-level graphics, interface to other languages, and debugging facilities. R is known as the predecessor of the S language.

Stata is one of the most popular and widely used statistical software in the world. It is used to analyze, manage, and produce a graphical visualization of data. The primary use of Stata is to analyze the data patterns. Researchers are using Stata in the field of economics, biomedicine, and political science.

Great article I’ll be back for some more.

R vs Stata: The main difference you must know - Mini Business News

[…] the correlation between R vs. Stata. Most of the students find it overwhelming to distinguish R vs. Stata to data science. As statistics students, one must understand the best language for data science […]