Difference between SPSS vs SAS is one of the major concern between statistics students. The world is changing at a rapid pace. That’s why the new technology is emerging with every passing day. Do you know that data play a crucial role in the evolution of technology? That’s why the importance of data is growing every day.

Nowadays, data is generated for very little things because the company wants every data which can be useful for technology evolution. But having the data is not enough for the company to make a conclusion. That’s why it is required to analyze the data using some statistical methods.

After processed by some of the statistical techniques that data help us in predicting the data trends. Now the question is how can we analyze the data with perfection. It is quite impossible as well as time-consuming to analyze the broad set of data manually. That’s why there are two most famous statistics tools makes the statistical analysis easier.

Today we are going to have an in-depth comparison between SAS vs. SPSS. The fundamental difference between these two is, SPSS is an analytical tool, while SAS is a programming language that comes with its suite.

Both these statistics tools are helpful in statistical analysis, business growth, and to find out the variance in actual work. We know that both of them are uses of statistical data analysis. But there are lots of differences between these two. Let us begin with the definition of each tool.

That’s why it is used by market researchers, health researchers, survey companies, government, data miners, and many more. As the name suggests, it was developed for social science. And it was the first-ever statistical programming language for the PC.

You can easily generate a report in SPSS. SPPS offers the tables and charts for reporting, and you can easily copy and paste charts and table in SPSS. Besides, as a statistics software, it is having the best in class user interface in the world.

SAS is one of the best statistical programming languages in the world. It doesn’t have the best in the class user interface, because it is a programming language. The major role of SAS is an advanced analytics, business intelligence, data management, and predictive analysis.

SAS is more robust than the SPSS because it is not providing the easy to use interface like SPSS. SAS doesn’t offer you the copy and pastes functionality for charts and tables. It is pretty tough to customized things on SAS. As I mentioned earlier, it is a programming language.

That’s why you need to have coding knowledge to do some customization in SAS. You do have better control over modeling all because of its command-line interface and advanced coding editor.

Data Processing is also faster in SPSS as compared with SPSS. SPSS can easily handle a large amount of data set. It provides the best features like sorting and splitting the data that makes it the best option for data handling.

The In-depth Difference Between SAS vs. SPSS

SPSS is a statistical software or tool for statistical analysis. SPSS stands for Statistical Package for the Social Sciences. As I mentioned earlier, it is the most reliable statistics software.

That’s why market researcher, survey companies, government agencies, and many more other industries use SPSS. It was developed for social sciences and was the first statistical programming language for the PC. A team of statisticians developed it in the year 1968 at Stanford University.

Eight years later SPSS had its own company known as SPSS.Inc. With the increasing popularity of SPSS, It was bought by IBM in the year 2009.

North Carolina State University developed it. The primary motive behind the development of this language is to analyze the vast quantities of agriculture data.

SPSS is the most available statistics software I’ve ever seen. The non-statisticians can use it. It is having the best in class easy to use interface with easy drag and drop menus. SPSS can be used in many fields, but it can play a crucial role in social sciences.

On the other hand, SAS is the most potent statistics programming language. Thus it is having a large amount of high-quality code for various statistics function. It is the leading commercial analytics software in the world. SAS is a well-tested programming language and all its updated releases in a controlled environment.

I want to recommend SPSS for a large set of data processing. SPSS can only process the smaller amount of data which should be smaller than the 100 MB. On the other hand, SAS offers various facilities to process a massive amount of data set using sorting and splicing the data.

Anyone in the world can learn SPSS. The reason is SPSS is offering the best user interface. It means the users do not need to learn the code. SAS is offering drop-down methods.

It provides the paste function which automatically creates the syntax for steps executed in the user interface. On the other hand, SAS depends on the Proc SQL. It means that it is quite easy for the person to learn SAS – who have experienced with SQL.

SPSS is the most popular software in some of the leading universities and companies in the world. It provides the user-friendly interface along with the complete documentation.

There is no need to write the 1000 lines of code in SPSS. It automatically writes the code using the paste button. Along with that, you will also find the best online support to solve any issue that you may face while using SPSS.

On the other hand, SAS is one of the widely used statistical programming languages in the industry. It also offers the drag and drop facility to the programmers. It can handle the massive amount of datasets.

SPSS is not free software, and It is a licensed software of IBM corporations. It is one of the most expensive statistics software in the world. But it offers limited syntax. It is also not adopting new technologies as compared with other statistics software.

On the other hand, SAS is also an expensive programming language. It is also not providing the user interface. You have to write many lines of codes to perform some task on SAS.

In the end, we have learned that both SPSS and SAS are quite helpful in the analysis of data in their unique way. Both of them are offering various functionalities to perform statistical methods. Now you may be quite confident to choose between SPSS and SAS.

There is not a clear winner of this battle between SPSS vs SAS. If you have some programming knowledge, then you should opt for SAS. Otherwise, SPSS can be the best option for you. It is also a product of IBM. It means that SPSS is quite reliable statistics software.

One more last thing if you would like to get into the education industry then SPSS is best for you. If you are going to the analytics industry, then SAS is the best option for you. Now it’s your turn to choose between these two. 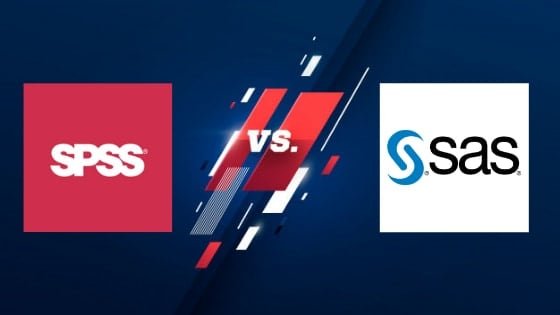